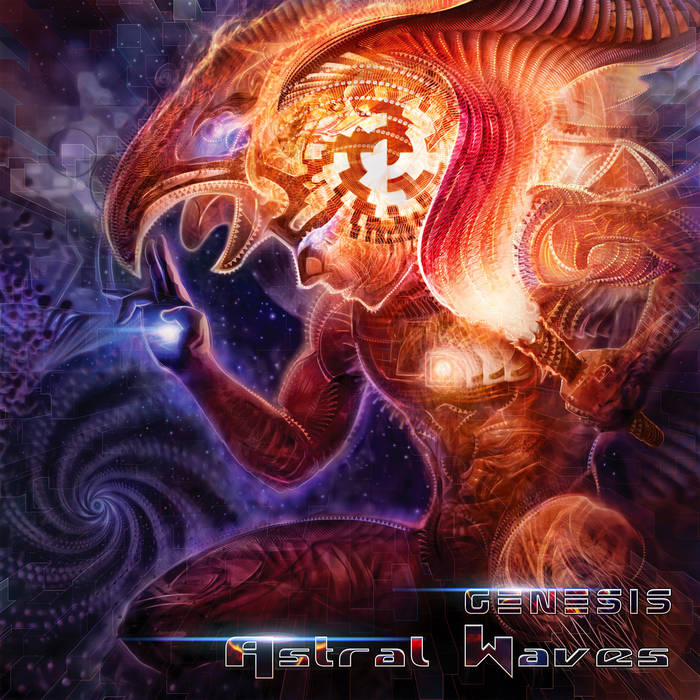 DaniElf Wow..wondefull! Unique, its not like everybody else, same thing over and over..this is real good and wonderful


Get ready for take off with the new visionary album entitled “Genesis”, by Astral Waves! Astral Waves is DJ Zen (aka Gabriel D.) based in Quebec, Canada. Originally hailing from France, he’s one of the pioneers of the Canadian psytrance scene.

DJ Zen created Altar Records in 2009; as label chief he’s been running and managing things ever since. On top of providing DJ and live sets on demand, he also does most of the artwork and audio mastering for Altar Records. His production as Astral Waves has gathered high praise in the psychill scene, along with the numerous compilations he’s compiled and curated for Altar Records (and other diverse labels).

His latest offering gives testimony to his emerging status as a very promising producer. This is a deep, tribal psychill journey made over the last three years with the following goals in mind: no repetition whatsoever of any sounds or samples, and maximum inspiration taken from nature, indigenous people, tribal drum rhythms and chants from all over the world. If you’re looking for a soundtrack to activate your inner Warrior of Light, you are in for a treat!

And while this is definitely a journey that takes you into the realm of psychedelic chill (with its deep, trippy vibe), it also comes with a nice serving of dub influences, some progressive chill, and strong tribal beats at key points for good measure —hence the title “Genesis”. In fact, it’s a wonderfully diverse album that plays out very much like a ‘best of Astral Waves’ compilation would. And for good reason: this definitely is his best work to date, and his most creative.
Each and every sound was carefully chosen and meticulously crafted, providing a unique feeling to the compositions as well as a musical trip to the continents of Asia, Africa, America, and Europe.

The album flows seamlessly even if each ‘wave’ or story has a different flavour. It seems that Astral Wave’s intention with Genesis here is to prove that psychill music is more than capable of tapping into our deepest feelings and states of mind. Since the dawn of mankind, music has been crafted to express feelings, sooth fears, express boundless joy and (most of all) get the tribe dancing, moving and shaking. So it was in the beginning, so it is now…Let the journey begin…

Track 1) “The Believer”: Genesis starts ever so gently with a long, evolving and deep psychill-dub track featuring the amazing vocals of French/Quebec singer Patrick Bernard —a renowned artist in the local new age and yoga scene. Experience spirit through sound with this thirteen minute odyssey (80 bpm).

Track 3) “Rain of Shooting Stars II”: the most psychedelic song on the album…using only three samples taken from the well known Alwoods track "Rain Of Shooting Stars”, this is night time music at its finest (100 bpm). Night trippers, prepare to trance.

Track 4) "La Danse du Feu" (Dance of Fire)”: the fourth stop on our voyage takes us into the primal forests of indigenous North America, for a raw, tribal journey with this (105 bpm) energetic composition. Samples of nature, spoken Native words, and the powerful kick give this tune its earthy, crunchy feel, while the sophisticated arrangement keeps things interesting. If you’re a fan of ‘A Tribe Called Red’ but looking for something a bit trippier, this song is pure medicine for your ears. Electric guitar by Raph LVD.

Track 5) "La Danse de l'Eau" (Water Dance)”: a gorgeous, evolving track with delightful flute lines from AEolia Project, recorded at Altar Records studios during the summer of 2016 expressly for this piece. In addition to grooving tribal percussion, the song also has an amazing climax that takes us on a sunny, positive journey to the heart of mother Africa (72 / 144 bpm). Strong vibes and guaranteed sunshine for all tribal dancers.

Track 6) “Optimistic II”: for this one, Astral Waves collaborated with Mobitex (aka Eyal Markovich) from Israel —a country that knows a thing or two about psychedelic music. While managing to keep a very musical feel, this track is a deep dive into modern dub-trance electronica (115 bpm).

Track 7) “Inflation Eternelle II”: Soaring melody lines and poignant key changes take this track to the next level. Clocking in at 112 bpm, get ready for an epic and beautiful excursion into sound, unfolding for your dancing pleasure.

Track 8) “Les Liens du Sang (Profondita remix)”: a stunning remix (110 bpm) taken from the last album by Astral Waves (“Magnetique”, published in 2015). With its gorgeous Goa style bass lines, dubbed out arpeggios, and emotive build ups, this track is a pure delight to bring to completion this one-of-a-kind album…

In conclusion, Genesis takes you on a voyage through the dawn of time, to the emerging of tribal trance music and spiritual consciousness in various cultures, and ultimately, to mankind's reaching to the stars. It’s a journey you’ll want to take again and again, surfing the Astral Waves created by Canada’s very own DJ Zen!

Offered in 24 Bit studio master only in Bandcamp.

Astral Waves music is made of feelings of the moment. Not intended to please everyone or a certain category of musical style. The music goes beyond formatted sounds and beats and goes from psy-chill, down-tempo, crossing trance and tribal grooves. Always trying to keep the true trance spirit of the early days. Pick up what you like ❤ Blessings ❤ ... more

Bandcamp Daily  your guide to the world of Bandcamp